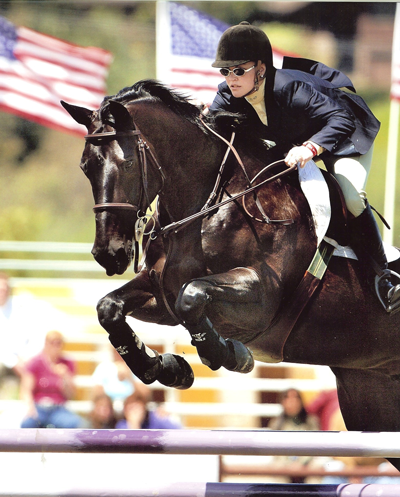 Born, raised, and educated in Portland, Oregon, Dr. Heather Wenzell developed a passion for the equine industry during her pre-teen years when she involved herself in three-day eventing and show-jumping. Her continued success at horse shows throughout North America ultimately led to her specializing in show-jumping and breeding Hanoverian sport horses.

Dr. Wenzell has ridden for a number of years as a Northwest A-Circuit Grand Prix rider, training under three-time Olympian Kevin Freeman, and later under Hap Hansen, a renowned US Grand Prix competitor. She continued to ride at this level while receiving a Bachelor's degree in Biology from the University of Portland. She currently trains and competes under the tutelage of Phillip Cillis of Westwood at Rancho Riding Club in San Diego, California.

In 1997, while continuing to compete throughout the northwest and california, Dr. Wenzell began veterinary school at Oregon State University. Upon recieving a Doctorate of Veterinary Medicine with a focus on equine medicine, surgery and dentistry in 2001, she recieved state licensure in Arizona, California, Oregon and Washington. Years of training and experience working as an associate equine practitioner for practices in both Arizona and California enabled her to move back home to the northwest in June of 2005. Soon after, she opened Spinnaker Farm Equine Veterinary Clinic while living in Lacey, Washington.